This tutorial is covers the steps on how to enable battery monitoring for the tinkerBOY Controller v3. Make sure your v3 is plugged in or connected to your Raspberry Pi before setting up the Battery Monitoring service.

Solder a wire from the BATT+ pin on the v3 to the positive wire(red) of the battery.

Login to your Pi via SSH and type the following command:

It will install the necessary software for the battery monitoring service. It will also upgrade your v3’s firmware if needed.

When it’s done you should get an “OK!” message if it’s successful. Otherwise, let me know when you get an error.

Issuing these commands will immediately start the Battery Monitoring service.

Sometimes you just want to connect your Raspberry Pi to your Wifi immediately when you first install RetroPie or Rasbian just so you can tinker with it soon and setup some stuff.

STEP 1. On a Windows PC insert your newly installed SDCard

With the sdcard plugged in (USB SDCard reader) your Windows 10 computer, fire up File Explorer and go to the boot partition of your sdcard.

Create a file called wpa_supplicant.conf inside the boot partition of the sdcard. Open it with any text editor like notepad and paste the following.

Replace “WIFI-NAME” and “WIFI-PASSWORD” with your wifi details. Save and exit.

Enable SSH so you can connect to your raspberry pi from any computer. Create a blank file called ssh inside the same boot directory of your sdcard.

Finally, eject the sdcard properly and plug it in to your Raspberry Pi. Turn on your Pi and it should connect to your network automatically.

These are the pins for the left and right audio as well as composite video on any Raspberry Pi 3 models. 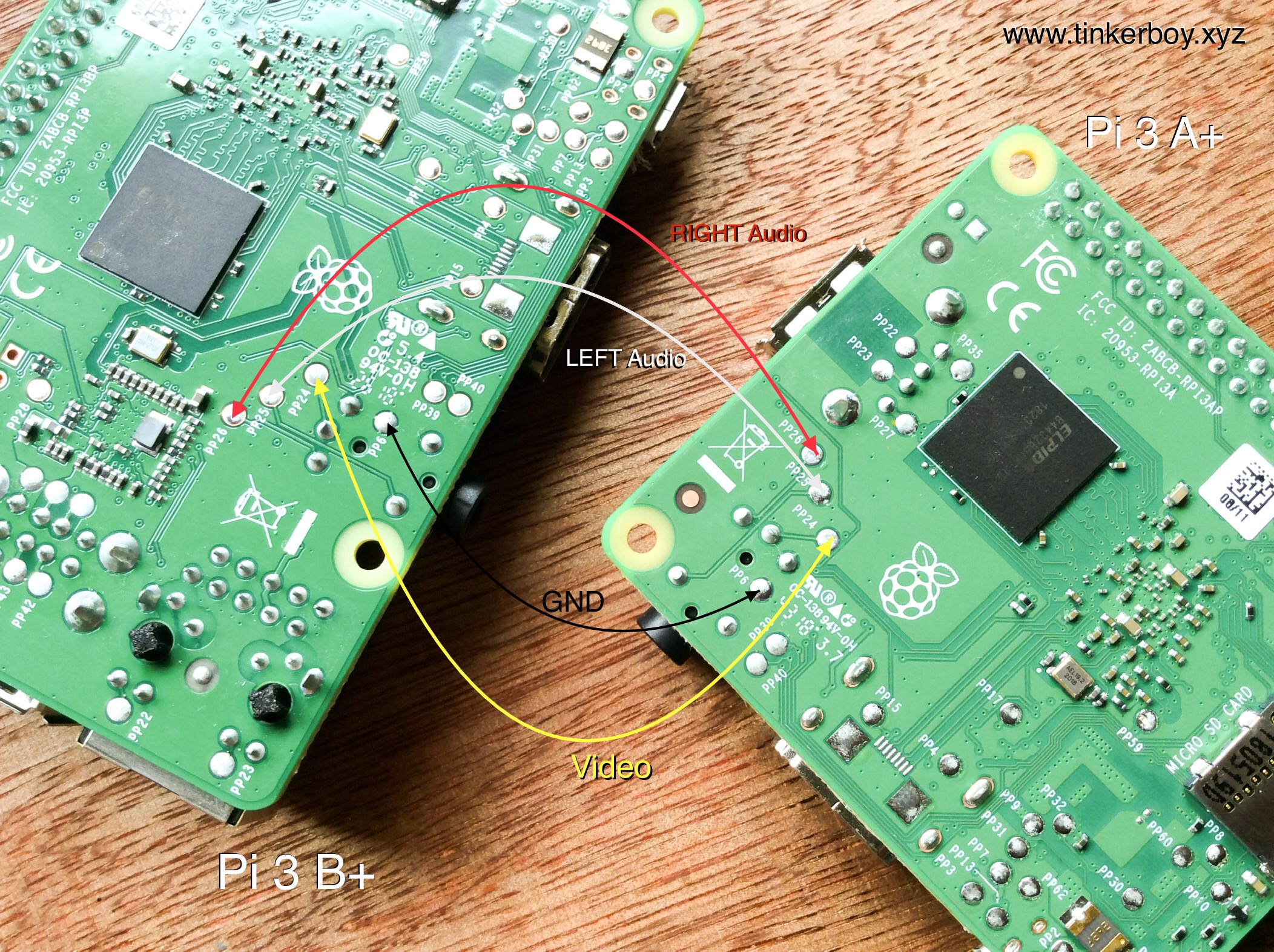 In order to avoid power related issues with any of the Raspberry Pi 3 model, it is recommended to just directly power it from your power supply (PowerBoost 1000c, GearBest PowerBoost, etc.). 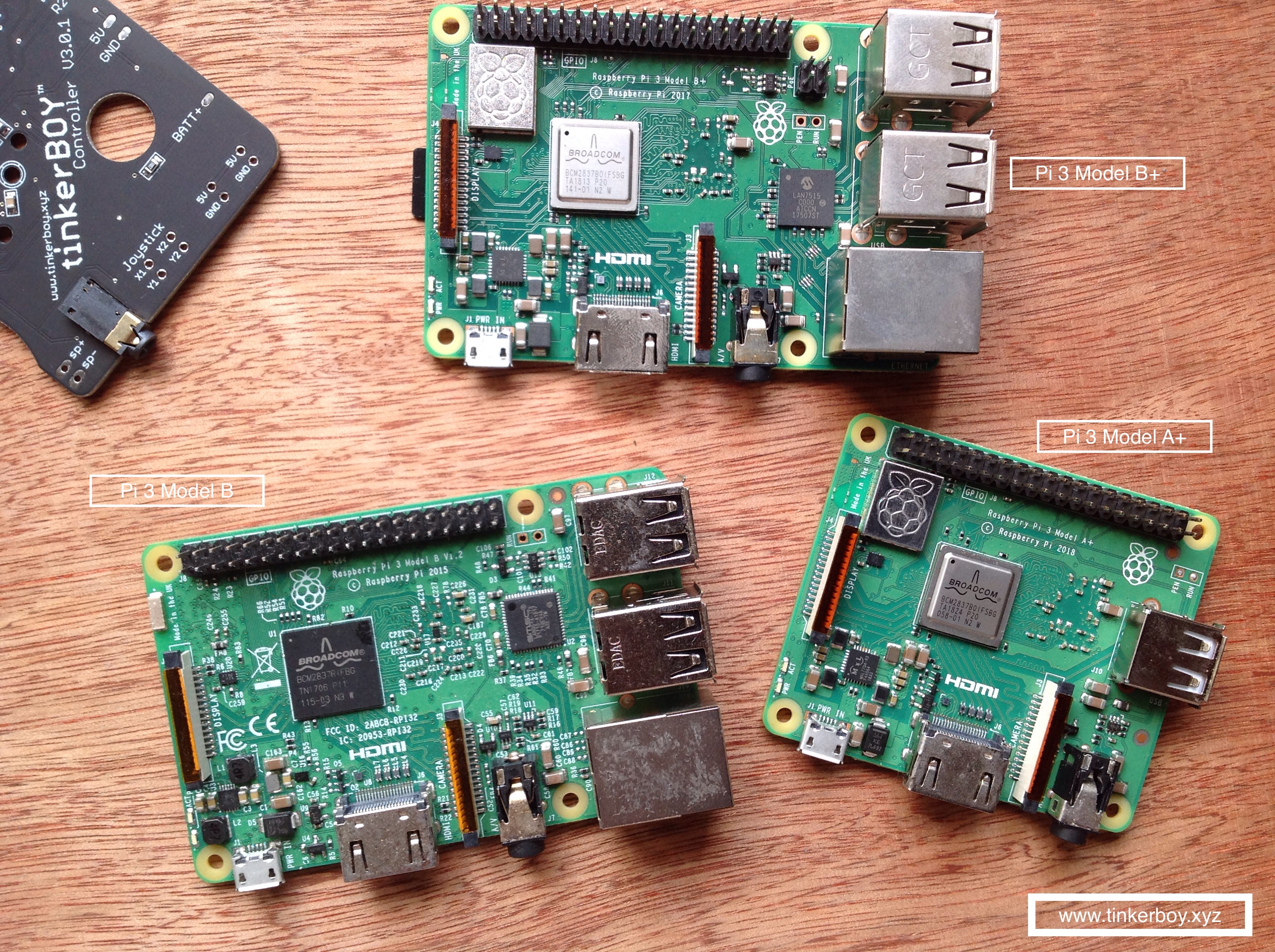 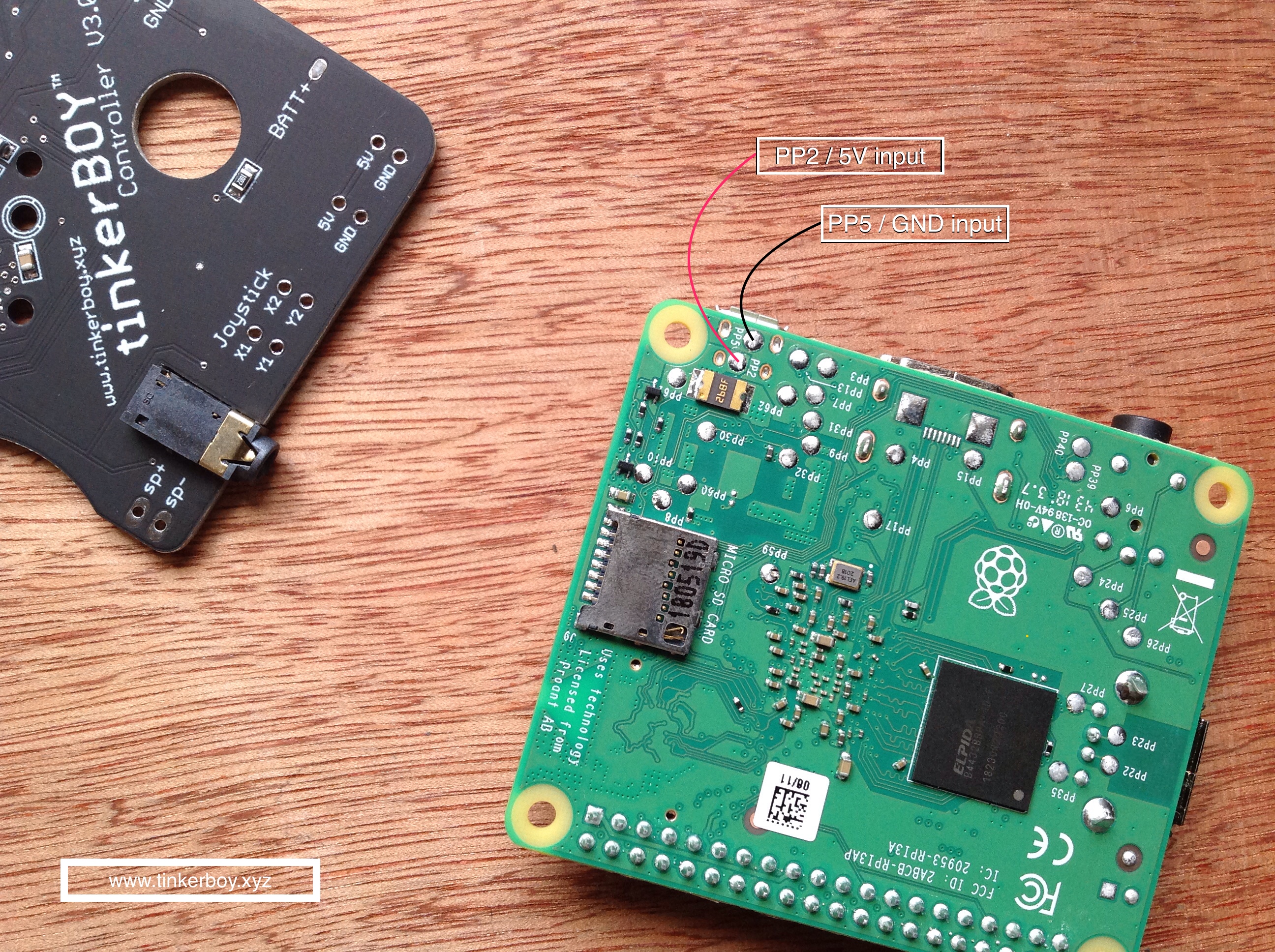 I’m currently working on a power board for Game Boy Zero which I will be calling the tinkerBOY PowerSwitch. It’s supposed to be a builtin upgrade for my tinkerBOY Controller v3.0 but I decided to design it separately and integrate a slide switch. This way, it’s not limited to just my v3 but can be used by anyone using any controller board as well as my other controllers like the v1.1, v1.2, v2.0. 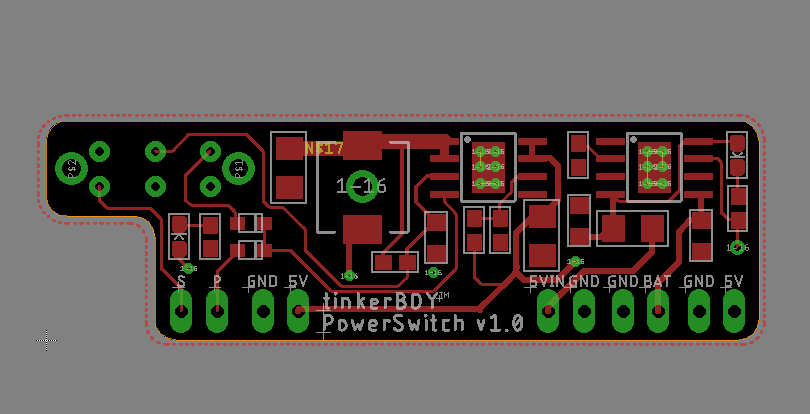 The 3 most important features will be 5V boost, battery charger, and a safe shutdown feature. I’m almost done with the design and I will be ordering some PBCs soon so I can test it. So don’t forget to subscribe to my facebook page at https://www.facebook.com/tinkerBOY/ for updates. 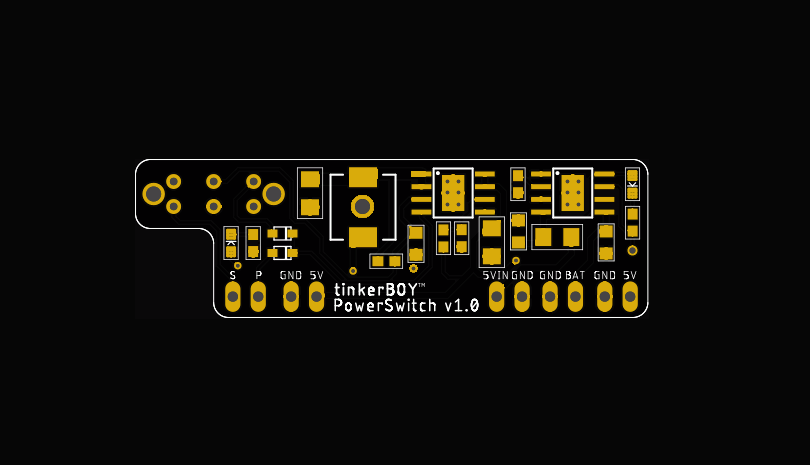 Update: tinkerBOY PowerSwitch has been realeased!

I’m always looking for ways to save time so here’s how you can setup putty to automatically login to your Raspberry Pi.

This method does not use a 40-pin header pins but it’s easier. Place the  Pi Zero on top of the DPI Adapter and align the holes. Use a binder clip to hold them together. 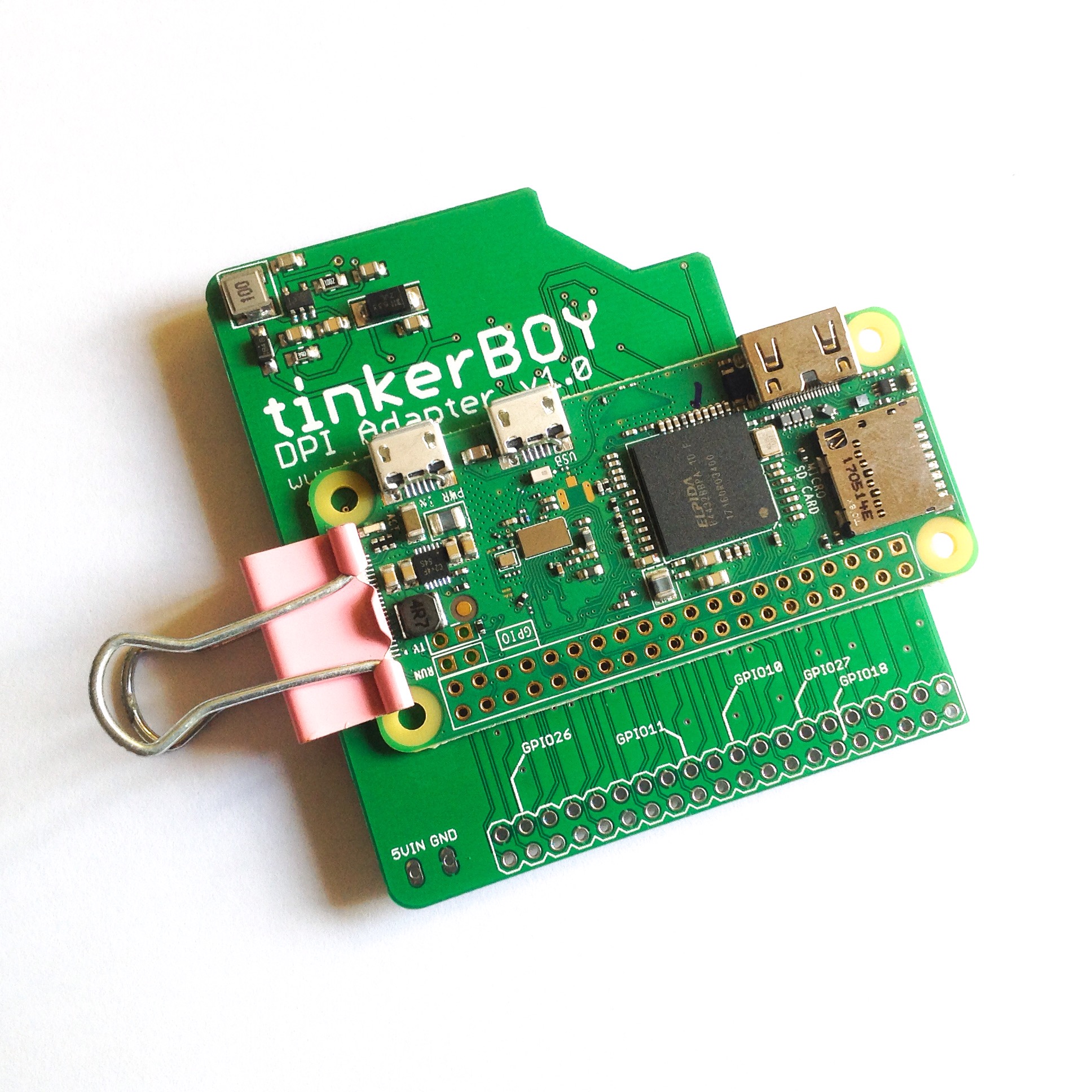 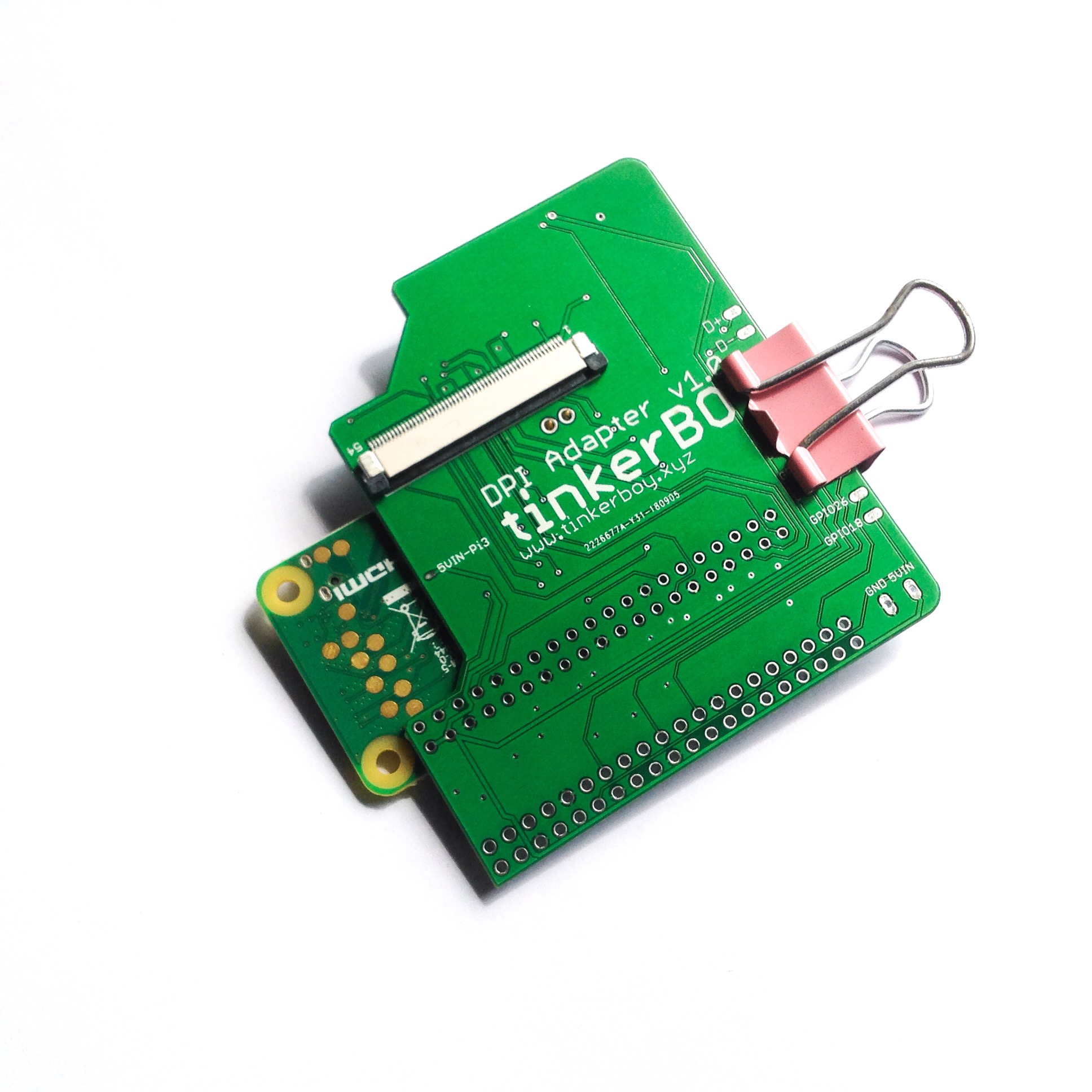 Now, start soldering each of the Pi Zero’s GPIO holes making sure there’s a proper contact to each of the holes on the DPI Adapter. 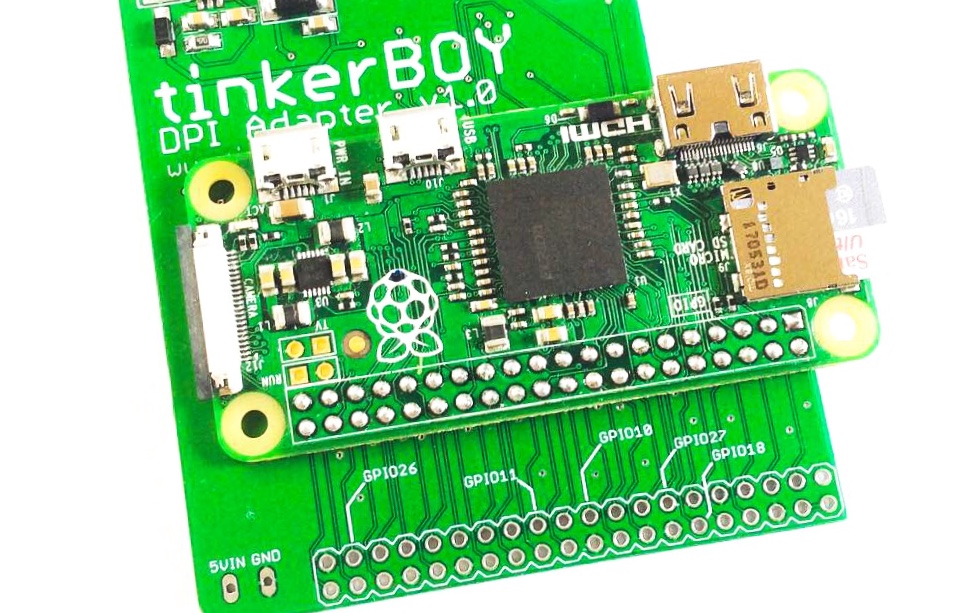 You can also solder from the bottom just to make sure each holes are soldered properly. 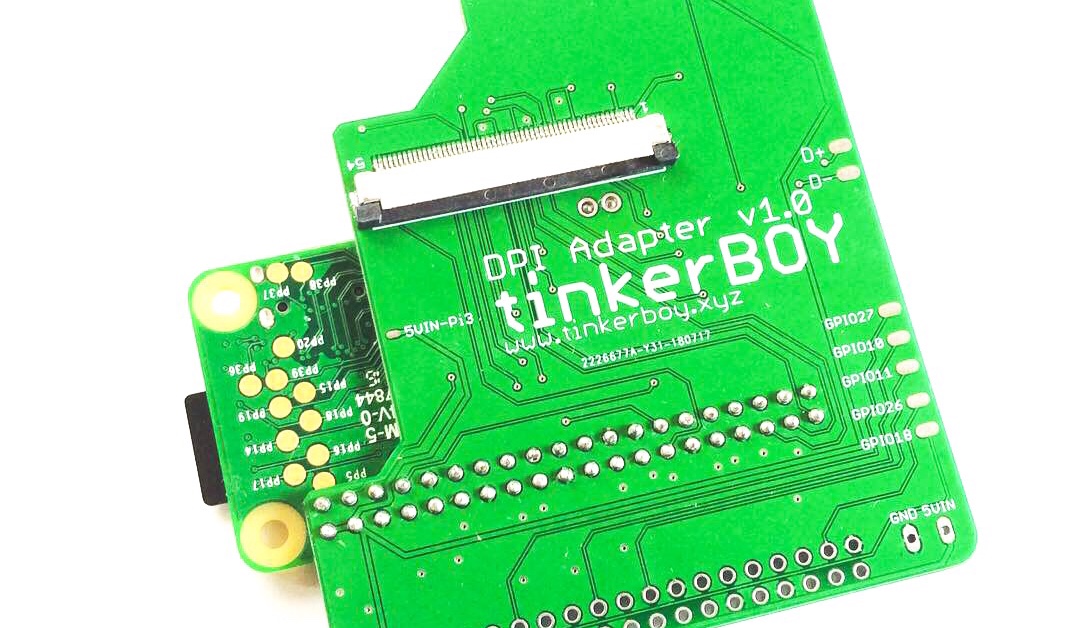 The final step is to solder the Pi Zero’s USB data pins (D+ and D-) to the 2 holes on the DPI Adapter. These holes will connect the Pi Zero’s data pins to the D+ and D- pads on the adapter for connecting any USB device. (Note: The D+ and D- pads on the DPI board V1.0 are mislabeled. The upper pad should be D- and the lower pad should be D+. Thanks to Paul for reporting.)

UPDATE: The D+ and D- data pins are now correctly labeled on v1.1 and moved to front left of the board just above the 5v and GND pin holes.

The 5VIN and GND pin holes below the tinkerBOY DPI Adapter are your 5v and GND inputs.

Start by placing the header pins in to the pin holes designed for the Pi Zero:

And mount the Pi Zero this way: 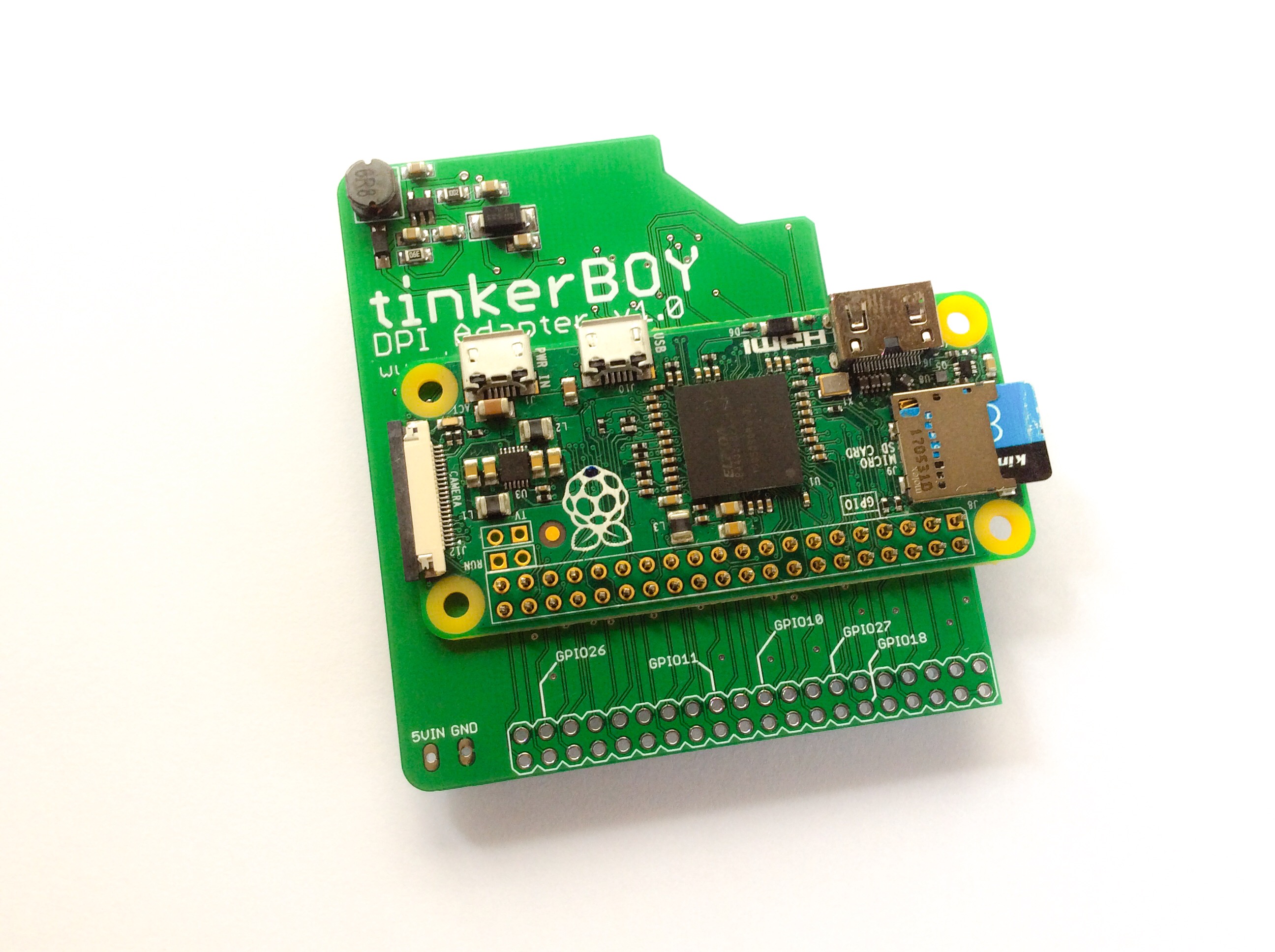 It’s recommended to put a kapton tape or anything in between the adapter and pi zero to avoid shorts before soldering the header pins to the Pi.

The next step is to cut the pins and plastic below the header pins and solder them to the DPI Adapter.

The final step is to solder the Pi Zero’s USB data pins (D+ and D-) to the 2 holes on the DPI Adapter. These holes will connect the Pi Zero’s data pins to the D+ and D- pads on the adapter for connecting any USB device. (Note: The D+ and D- pads on the DPI board are mislabeled. The upper pad should be D- and the lower pad should be D+. Thanks to Paul for reporting.) 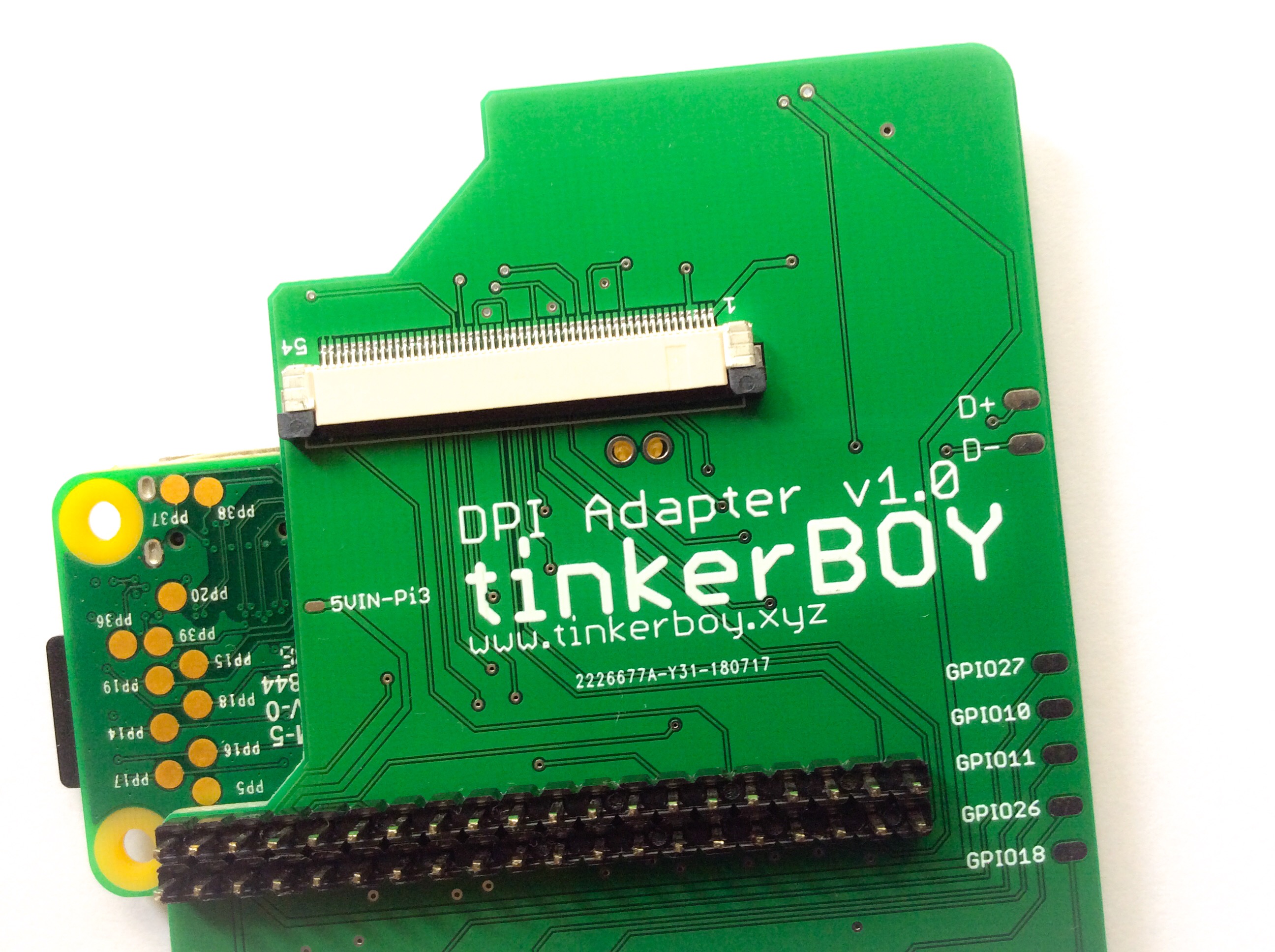 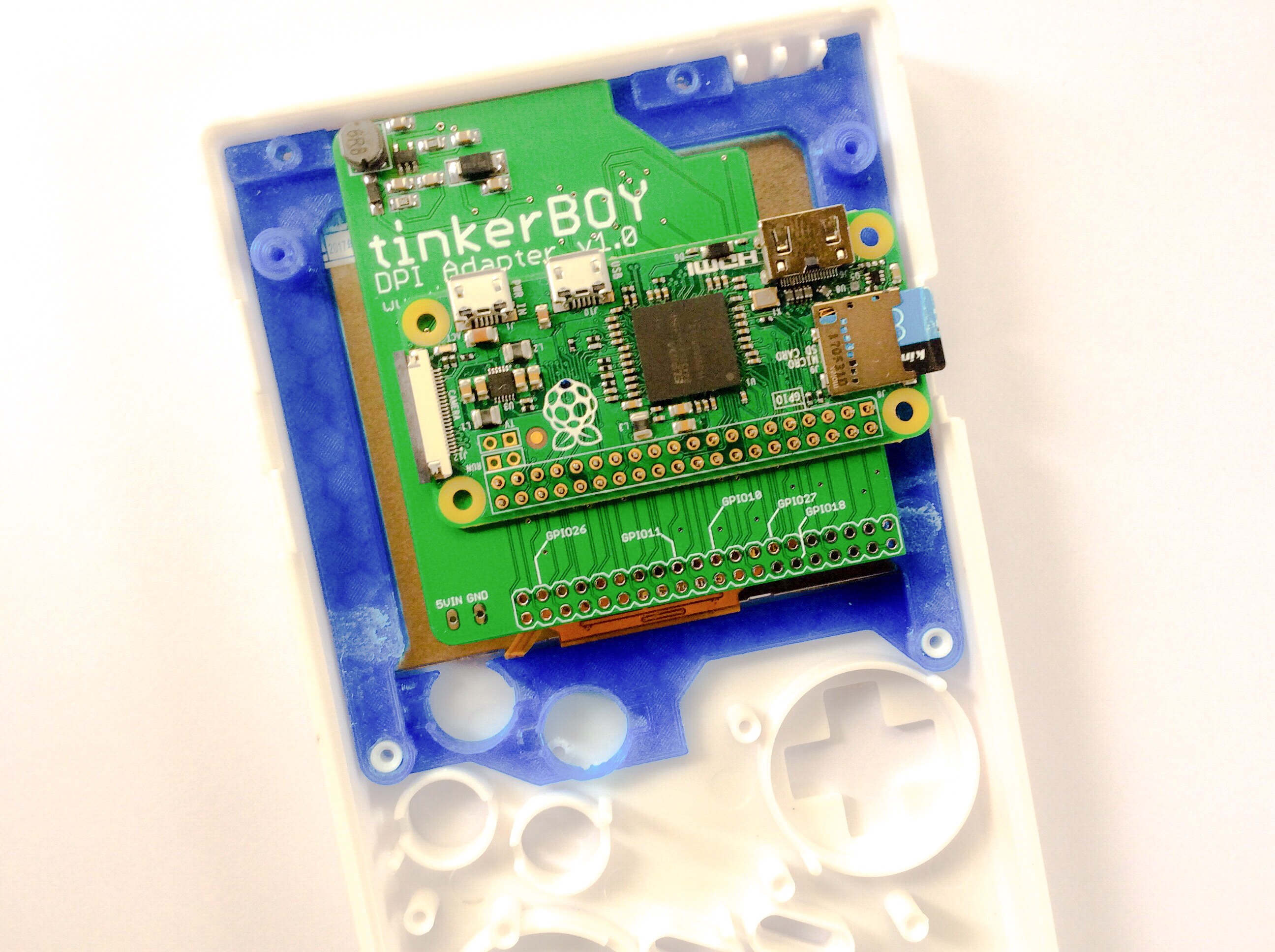 The 5VIN and GND pin holes below the tinkerBOY DPI Adapter are your 5v and GND inputs.

The DPI Adapter uses a 54-pin Top Contact FPC Connector for the 3.5″ LQ035NC111 LCD. When you insert the LCD’s ribbon cable make sure the contact pins are facing upwards. 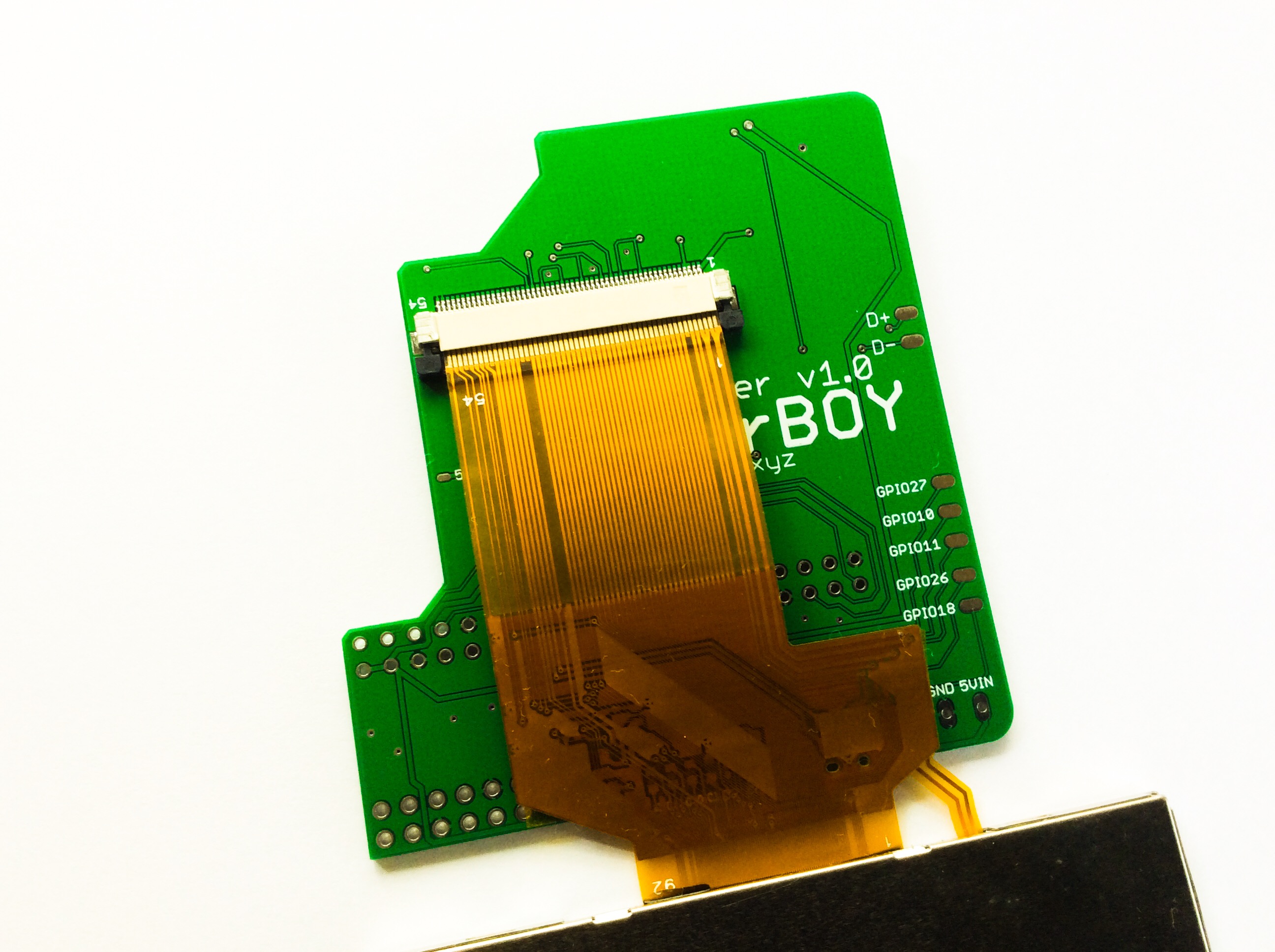 Edit the config.txt and copy/paste the following lines:

The tinkerBOY DPI Adapter v1.0 uses a custom overlay for the DPI interface. Download this file, unzip and place the dpi18_666.dtbo file inside the overlays folder in the boot partition of the sdcard where the config.txt is also located. 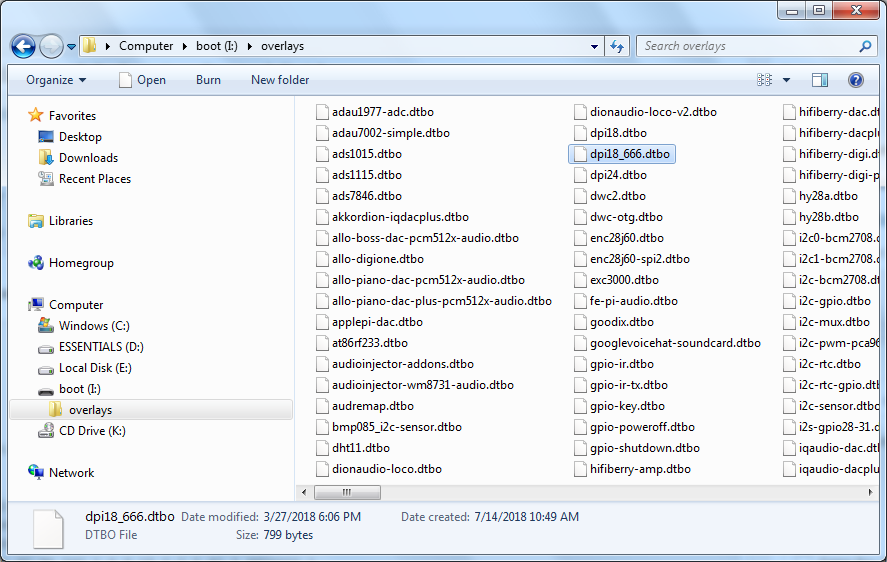 That’s it for the settings.

NOTE: DO NOT turn the power on without connecting the LCD (LQ035NC111).

This guide might also work on any screen that we use for building our Game Boy Zero as long it uses the CL6201 LED driver IC with the “7001” label on it.

I will be using a Raspberry Pi Zero for this tutorial but any Arduino/Atmel chips with PWM pins can also be programmed to do the job. I have actually tested it with an attiny13a and it works just fine.

Before we start, follow the Wiring Guide for the 3.5″ GearBest Screen with 5V Mod. Then start by soldering a wire from the CL6201’s EN pin 4 to the Pi Zero’s GPIO19 pin. The CL6201 Datasheet says that the EN pin can be used to adjust the brightness by connecting it with a PWM square wave signal between 100Hz and 100KHz. That means with the Raspberry Pi’s capability to produce PWM signal we can control the brightness with it. 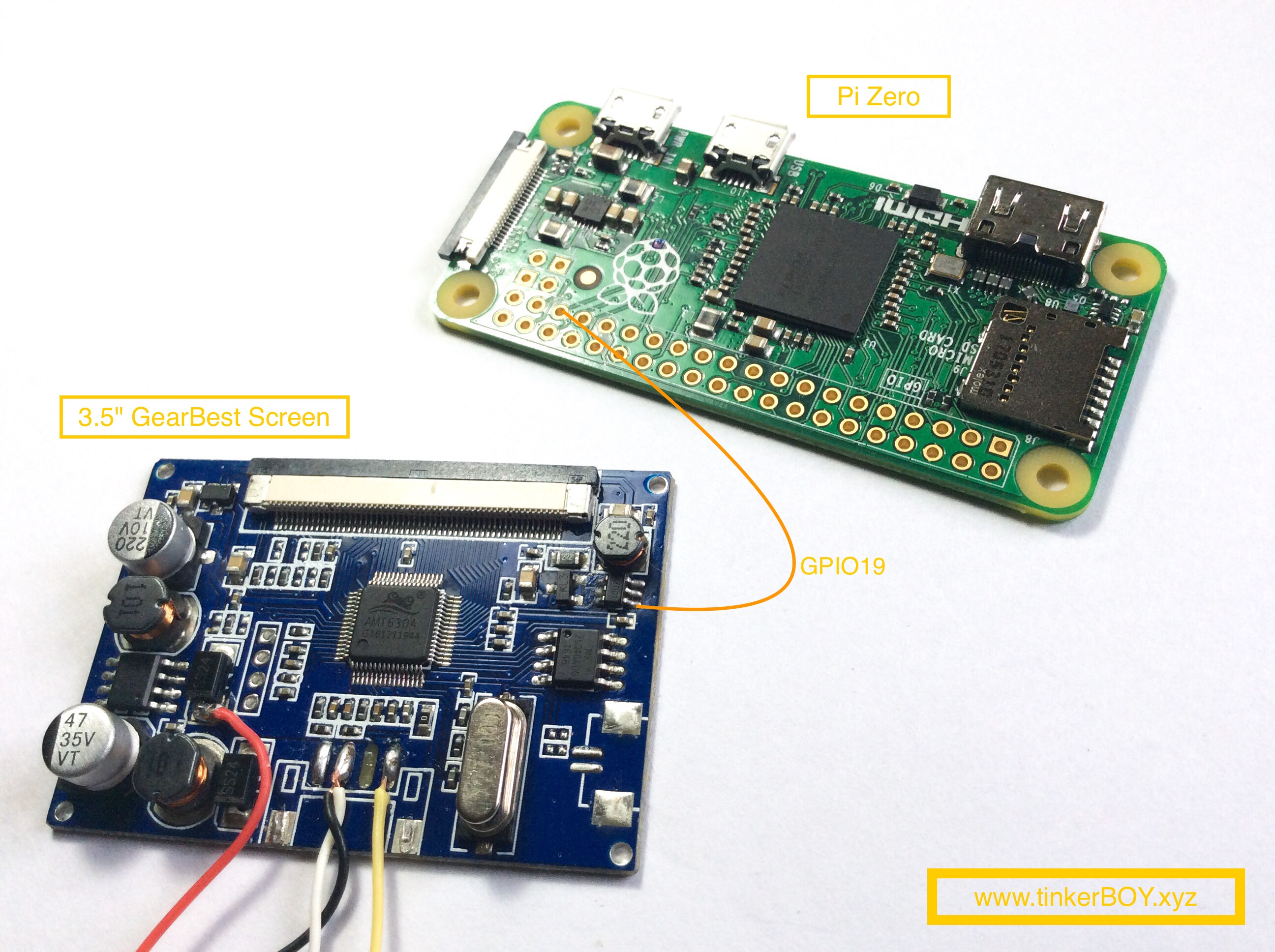 For the control buttons let’s use two tactile buttons for increasing and decreasing the brightness. Wire the buttons like this: 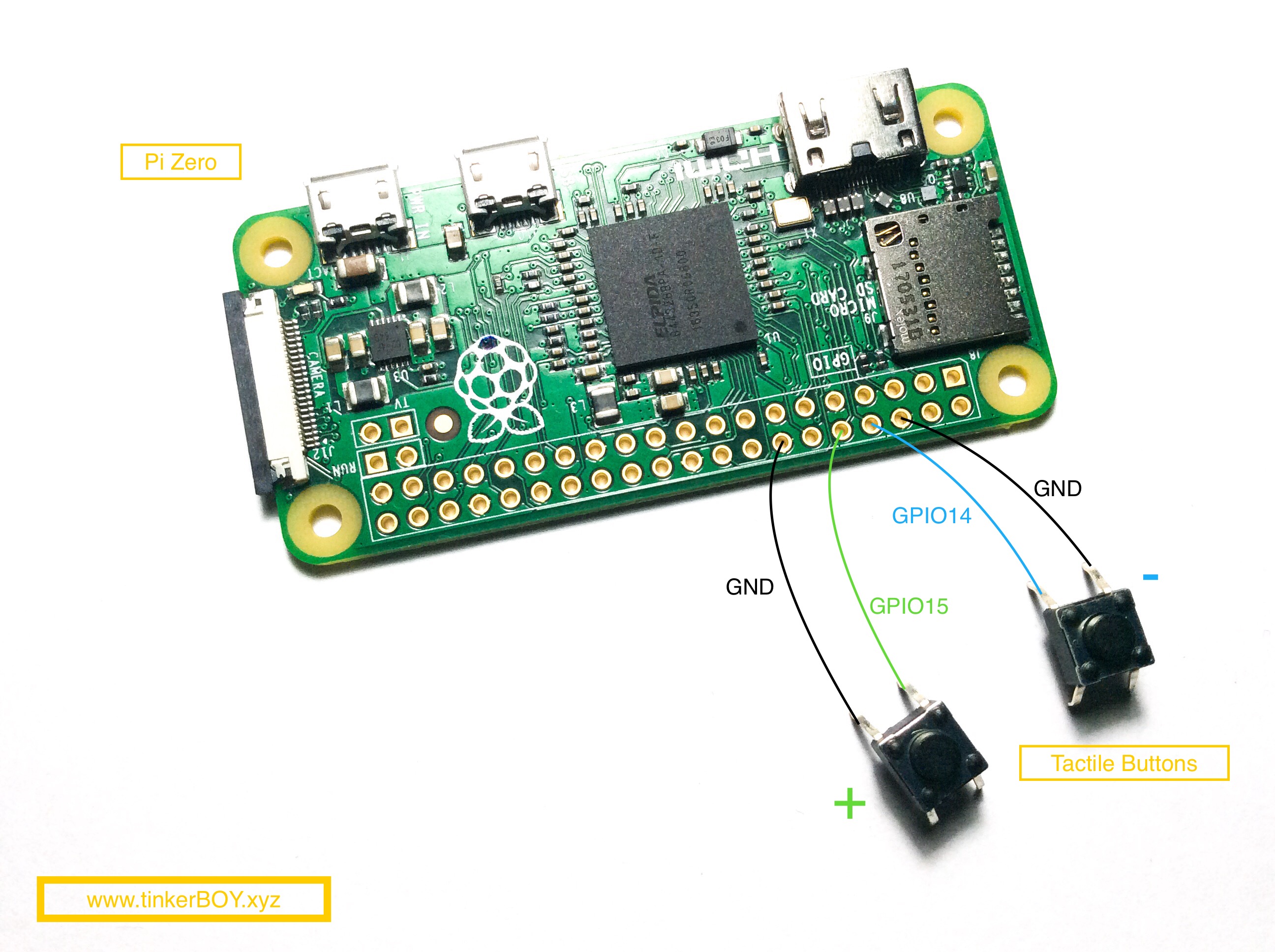 You can write a program in Python or C to do the PWM routine but let’s keep it simple by using a progam called pigpio and write a simple python to just call it. Login to your Raspberry Pi and install the program by following the instruction at abyz.me.uk/rpi/pigpio/download.html.

We are now ready to test the program. Type the command sudo pigpiod to load the pigpio daemon. Now we can test it with the following command format:

GPIO is the gpio pin we want to use which is GPIO19 and DUTYCYCLE is what controls the brightness.

The above code should dim the screen. Try experimenting with other DUTYCYCLE values from 0-255.

Now for the actual buttons to control the brightness I wrote a simple python to call the pigpio program. Copy the code below and paste to a new file with .py extension. You can just name it as brightness_controller.py if you want.

Run it by typing the command  python brightness_controller.py. Press each of the buttons and it should increase or decrease the brightness on the screen.

That’s it! Let me know in the comment below if this works for you.

I get a lot of wiring inquiries about the 3.5″ GearBest Screen so I decided to make one.

Most of these 3.5″ screens are intended for 12v power supply. The 12V input goes to a chip called XL1509 and converts that to 5V. Like any DC to DC converter there’s always going to be wasted power as a result of the conversion. This is the reason why I highly recommend that you do the 5v mod eventhough the screen works if you feed it with 5v without the need for any modification.

..just be careful not to lift the contact pads which I’ve mistakenly done here. Luckily the board has two video connections which are AV1 and AV2. I will be using the AV1.

The diagram below shows where to connect to the PWM audio on a Pi Zero(bottom view):

PWM0 and PWM1 are the right and left audio channels corresponding to GPIO 18 and GPIO 13 on the Pi Zero.

Your /boot/config.txt should include the following line: dtoverlay=pwm-2chan,pin=18,func=2,pin2=13,func2=4

Edit /etc/modprobe.d/alsa-base.conf and the add the following:

Finally edit the file /lib/modprobe.d/aliases.conf and comment the line:

Or if you just want the USB Audio to be your primary sound device.

First, let’s choose which device to use. Enter the command cat /proc/asound/modules to list all available sound devices whether it’s a PWM audio or USB sound device.

The command you just entered should output something like:

The above code uses both left and right audio input to output to LEFT channel. If you want the output to the RIGHT then you can just edit the line 8 – 14 to:

Restart ALSA by sudo /etc/init.d/alsa-utils restart or you can reboot your Raspberry Pi using sudo reboot.

and remove “sync” from MOUNTOPTIONS 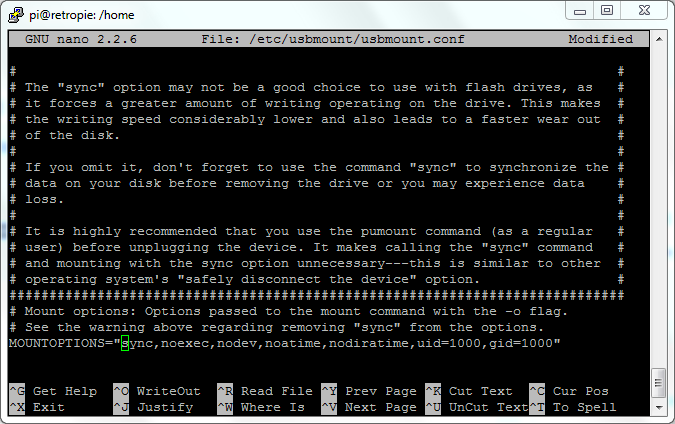 This is how you adjust the volume via the terminal or command line:

If you’re wondering how to test the left and right audio channel of your Raspberry Pi whether using an external USB sound device or the builtin audio you’ve come to the right place.

Connect to your Raspberry Pi via SSH or open the Terminal application. The simplest way to test the sound is to use the speaker-test command. Enter the following to test sound from your default configured audio device. 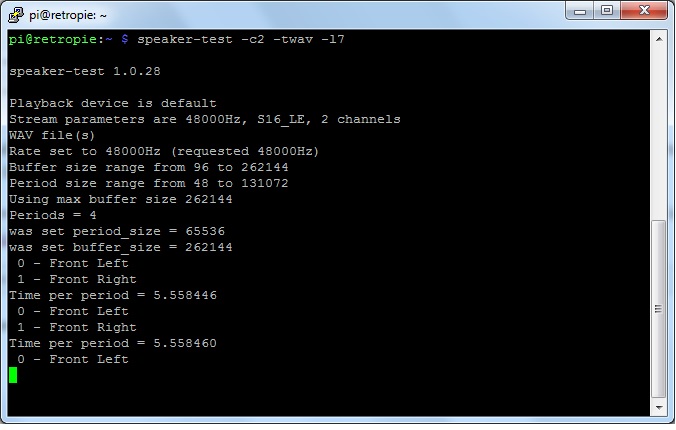 You should hear an alternating sound coming from your left and right speakers.

If you’re using a USB sound device you first need to check its device id/number.

Then use speaker-test -c2 -twav -l7 -D plughw:N,0 replacing N with the number before snd_usb_audio. Like this:

Output should the same as the picture above and alternating sound from left and right audio from your speakers.

The above command will auto-detect or use any default configured audio device. Otherwise, if you want to test your USB Sound device enter the following command with 1 as the device number: 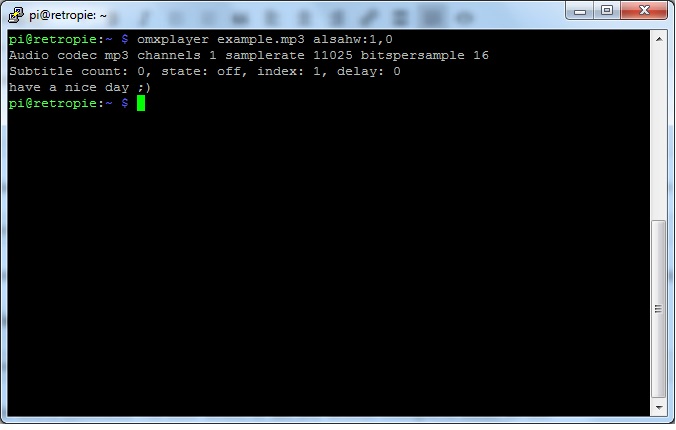 If your getting an error “failed to find auto mixer: lv10: VolumeControl ::init() failed to find mixer elements” in RetroPie just add the following line in your config.txt.